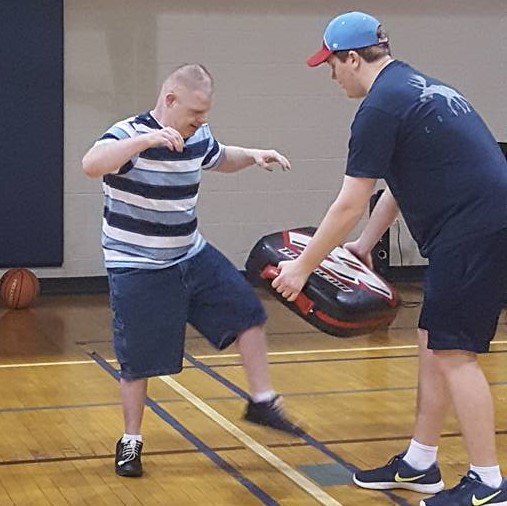 Nathan moved to Middle TN with his family just over 9 years ago from California. When the Olivers first moved to Tennessee they struggled to find the right programs and activities outside of home and church for Nathan. This was hard on him and his family as Nathan thrives best when he is active and involved in his community.  He enjoys the social interaction with friends and learning new things.

Today, Nathan is now very involved with DSAMT and regularly participates in Circle of Friends and other activities.  He is also one of four self-advocate employees at DSAMT, hired for its Pepe’s with a Purpose employment and fundraising program.

Nathan began working at DSAMT in September 2017 – his very first job at age 35.  Nathan is dual diagnosed with Down syndrome and Autism and is also largely non-verbal due to a phonetic processing disorder, so we knew that he would need some supports to be successful.  We weren’t even sure if he would enjoy the work or if we would even be able to provide the supports he needed.  But, we were determined that if he wanted to work, we would make it happen.

Our self-advocate employees hired for Pepe’s with a Purpose program assemble fresh pizza kits once a month alongside DSAMT staff and volunteers.  This involves unloading a truck of supplies and ingredients; opening boxes, cans and bags; organizing the kitchen; wearing hairnets and gloves; putting the right amount sauce, cheese and pepperoni into containers; counting crusts; assembling the kits into boxes; loading boxes into a truck; and cleaning up.   It sounds simple, right?  Well, keep in mind, these four self-advocates and four volunteers put together more than 100 kits in about 2.5 hours in October!

Remember, this is Nathan’s first job.  So on the first day, Nathan kept largely to himself and appeared uncomfortable a number of times, fixating on his favorite slinky.  Interactions were somewhat difficult, though we did sense some enjoyment when he intentionally overfilled his pepperoni cup a few times to give Alecia a hard time (she was in charge of weighing pepperoni).  Nathan needed a lot of assistance that day and was done working before the work was done.  We weren’t quite sure if he would want to come back.

But, over the course of just three months of working, BIG changes were seen in Nathan – and not just at work!

Rather than needing lots of encouragement at Circle of Friends, Nathan willingly joined other participants in activities, fully participating in kickboxing, following all instructor directions.  We even caught him smiling several times.

When Nathan arrived to work in November, he was told it was time to work.  His mother commented to us that she didn’t think he’d part with his slinky.  He surprised everyone when he handed over his slinky and immediately went to wash his hands and held out his hands for help with his work gloves.  He wasn’t slow in his work but was determined and steady at his pepperoni station and finished at the same time as the other stations. In addition to the progress DSAMT has seen in Nathan, his parents say Nathan is “overall happier, moving a little faster and willing to be more involved in activities.”

Learning is a lifelong process, and it never stops.  “We are so proud of the progress that Nathan has made in his social interactions and his work skills,” said DSAMT executive director, Alecia Talbott, “It’s the mission of DSAMT to empower individuals with Down syndrome to lead meaningful, included lives, and that’s exactly what we are seeing with Nathan.   Each and every person has an extraordinary gift to contribute, and nothing is greater than enabling people with Down syndrome to find that gift and to share it with the world. I hope other families read Nathan's story and see greater possibilities for their child or adult with Down syndrome.”

Additional progress is expected for Nathan, as he gets more involved in his community.  He recently started a three-day-a-week day program at the Joy Center in Mt. Juliet.  And, of course, as DSAMT’s Pepe’s with a Purpose Program grows, he could be working even more at DSAMT – so eat more pizza and help make this another extraordinary year of progress for Nathan!