DSAMT is guided by a 15-member volunteer Board of Directors, representing a broad range of experience and knowledge. Our advisory committees comprise parents and professionals who provide valuable input to the organization. 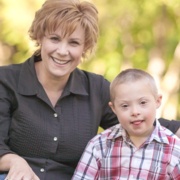 Alecia became the executive director of DSAMT in 2012, after spending several years as an active member and volunteer in our organization and in the disability community. She received her BA & MA from Western Kentucky University, taught at Nashville State and Volunteer State Community Colleges, directed marketing at Passport Health Communications, Inc. and was a freelance marketing professional before joining DSAMT.

Ms. Talbott is a strong advocate for inclusion and acceptance for those with Down syndrome and other disabilities in the community and schools, having completed the Vanderbilt Volunteer Advocacy Program, Wrightslaw training and other advocacy trainings. Her passion lies in helping those with Down syndrome show the world that those with “something extra” bring extraordinary gifts to our communities that should be recognized and valued.

She also serves on the Disability Coalition for Education, Vanderbilt's Disability Pathfinder Advisory Committee, the Tennessee Disability Coalition Board of Directors, Davidson County Mayor's Advisory Committee for People with Disabilities, and the Wilson County Family Support Advisory Board. In 2011 she was named Best Buddies TN Champion of the Year and in 2016 received the Nashville Business Journal’s Woman of the Year Award.  She is also a National Down Syndrome Advocacy Coalition Member and  NDSS DS-Ambassador. 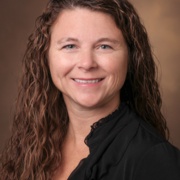 Tanya was previously the program coordinator for the Down Syndrome Multi-specialty Clinic at the Monroe Carrell Children’s Hospital at Vanderbilt for 5 years, before joining DSAMT as its progam director in 2017. She is a member of the Down Syndrome Medical Interest Group, The Vanderbilt Down Syndrome Journal Club, and has acted as a liaison to the Down Syndrome Family Advisory Council. She has a MA in professional counseling and interned as a domestic violence counselor for adults and children.

Mrs. Chavez's passion and dedication for individuals with Down syndrome and disAbilities goes far beyond her professional career.  She has 16 years volunteer experience with children and young adults with disAbilities through the Muscular Dystrophy Association and the Alliance for Recreational Empowerment.   She was a member of DSAMT’s Board of Directors for 5 years. 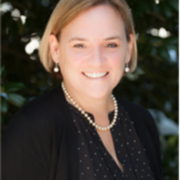 Erin Richardson is a parent of three children, including an 18-year-old son with autism and a chromosomal abnormality. She is a graduate of American University (1988) and The University of Florida College of Law (1992). Formerly a practicing attorney, Erin’s journey with her own son eventually led her away from the practice of law, and into helping and advocating for other students with disabilities.  Erin served as the Director of Legal Advocacy at The Arc Davidson County from 2007 to 2009, and volunteered for Mental Disabilities Rights International from 2009 to 2010 (in Belgrade, Serbia).  During her time at The Arc of Davidson County, she was instrumental in creating what is now the Volunteer Advocacy Program, currently housed at the Vanderbilt Kennedy Center.  Erin co-founded the Special Education Advocacy Center (SEAC) in 2011, and served as that organization's Executive Director until 2017.  She recently has served as a special needs trust officer at Cumberland Trust.  She is a member of COPAA and a frequent speaker/lecturer on special education topics.  In her free time, Erin enjoys spending time with her family, yoga, reading and knitting. 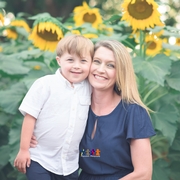 April is a native of Trenton Tennessee and moved to Murfreesboro in 1999 to begin her college career at Middle Tennessee State University. There she earned Bachelor of Science degree with honors. In 2006, she graduated with honors from the University of Tennessee Health Science Center with a master’s degree in physical therapy.

For the past 15 years, April has worked at Saint Thomas Midtown Hospital in the rehab services department where she has worked with both adults and with children in the NICU. She is married to husband, Brandon, and together they have a 9 year old son, Bennett, who has something extra. April has served DSAMT over the years as a first call representative and just finished her second term on the board of directors. In 2019, she received the DSAMT Founder’s award. 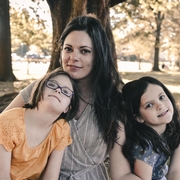 Ms. Chandler grew up in Knoxville, TN, where she attended the University of Tennessee. She moved to Nashville in 2009 and soon started a family. She has two beautiful daughters, one of whom has Down syndrome. Abby has been actively involved in DSAMT since receiving a prenatal diagnosis of Down syndrome for her first daughter, Emma.  She is very excited to join DSAMT in 2022 as office manager and parent representative.